Massage is one of the oldest practices for improving the body. Massage effect on various areas of the body helps to solve a large number of problems.

During a massage session, the flow of lymph, interstitial fluid, blood improves, tissues receive more oxygen, trace elements, vitamins, as a result of which the muscle performance is restored and improved. Another influence – the metabolism, skin respiration in the affected area increases.

To eliminate excessive neuromuscular and psychological stress, the soothing effect of massage is used. A calming effect develops with rhythmic and prolonged stroking of the entire body. The calming effect is due to the release of endorphins (natural pain suppressors) and the development of the inhibition process in the Central nervous system, which is achieved by rhythmic and prolonged irritation of receptors located in ligaments, muscles, tendons. Holding a massage for a long time at a slow measured pace gives the development of a calming effect. 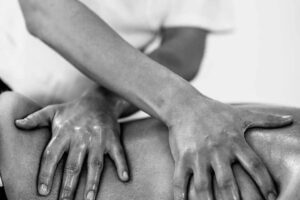 The normalizing effect is due to the regulation of nerve impulses in the brain. Massage normalizes the processes of excitation and inhibition of the brain. During a massage session, a focus of positive arousal is formed in the area of the massaged muscles, which can inhibit the already existing pathological focus of arousal in the brain.

The normalizing function of massage is used in various injuries to restore the injured area and prevent the development of muscle atrophy. To normalize the functions of the body, segmental massage of individual reflexogenic zones is used. Massage makes it possible to improve the neuromuscular apparatus, reduce muscle and tendon tension and improve the overall condition of the body as a whole.

At the heart of any massage technique is the strengthening of lymph and blood circulation, which activates many vital processes. It is especially important now that under the influence of warming movements, harmful toxins and metabolic products are removed from the body: thus, we become more protected against aggressive environmental conditions.

By stimulating certain reflexogenic zones, it is also possible to directly increase the body’s resistance to infections. These bioactive points are located all over the body: on the head and face, neck, back and limbs. When the pressure is properly applied, inflammation is reduced, pain is eliminated, and the work of the Central nervous system is normalized, the functioning of internal organs and blood pressure is restored.

In addition, massage affects the production of hormones that resist diseases. For example, serotonin contributes not only to a good mood, but also to rapid healing of tissues, and reducing cortisol preserves the integrity of cells responsible for fighting the virus.

Also read: Why do you need massage? Part II